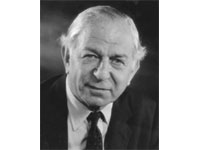 Each year an internationally eminent figure in the science world is invited to address the British scientific community at the Zuckerman Lecture.  The lecture is named after the first Government Chief Scientist, Lord Zuckerman.

The Twelfth Zuckerman Lecture in, entitled The End Of Poverty, was given by Professor Jeffrey D. Sachs, Director of and Director of .

The Lord Zuckerman was one of the most distinguished scientists of the last century and was at the heart of British science for over sixty years.  He studied medicine in South Africa and in the UK before becoming the Zoological Society’s Prosector (Research Anatomist) in London.  He taught at Yale and Oxford in the and was made Professor of Anatomy at the University of Birmingham.

Solly Zuckerman was created a life peer in and took the title of Baron Zuckerman of Burnham Thorpe.  He died in April .  Lord Peyton of Yeovil has written a biography of Lord Zuckerman (A scientist out of the ordinary – Solly Zuckerman by John Peyton [Pub. John Murray ISBN 071956283X]).